Bellver Castle is a 14th century Gothic-style castle located in the city of Palma on the island of Majorca, Spain. Built by King James II of Mallorca, it is one of the few circular castles in Europe and offers stunning views of the city and the Mediterranean Sea. The castle has a rich history, having served as a royal residence, a prison, and a military academy. Today, it is open to the public and is a popular tourist attraction, offering guided tours, cultural events and exhibitions. With its unique architecture and panoramic views, Bellver Castle is a must-see for any visitor to Palma. 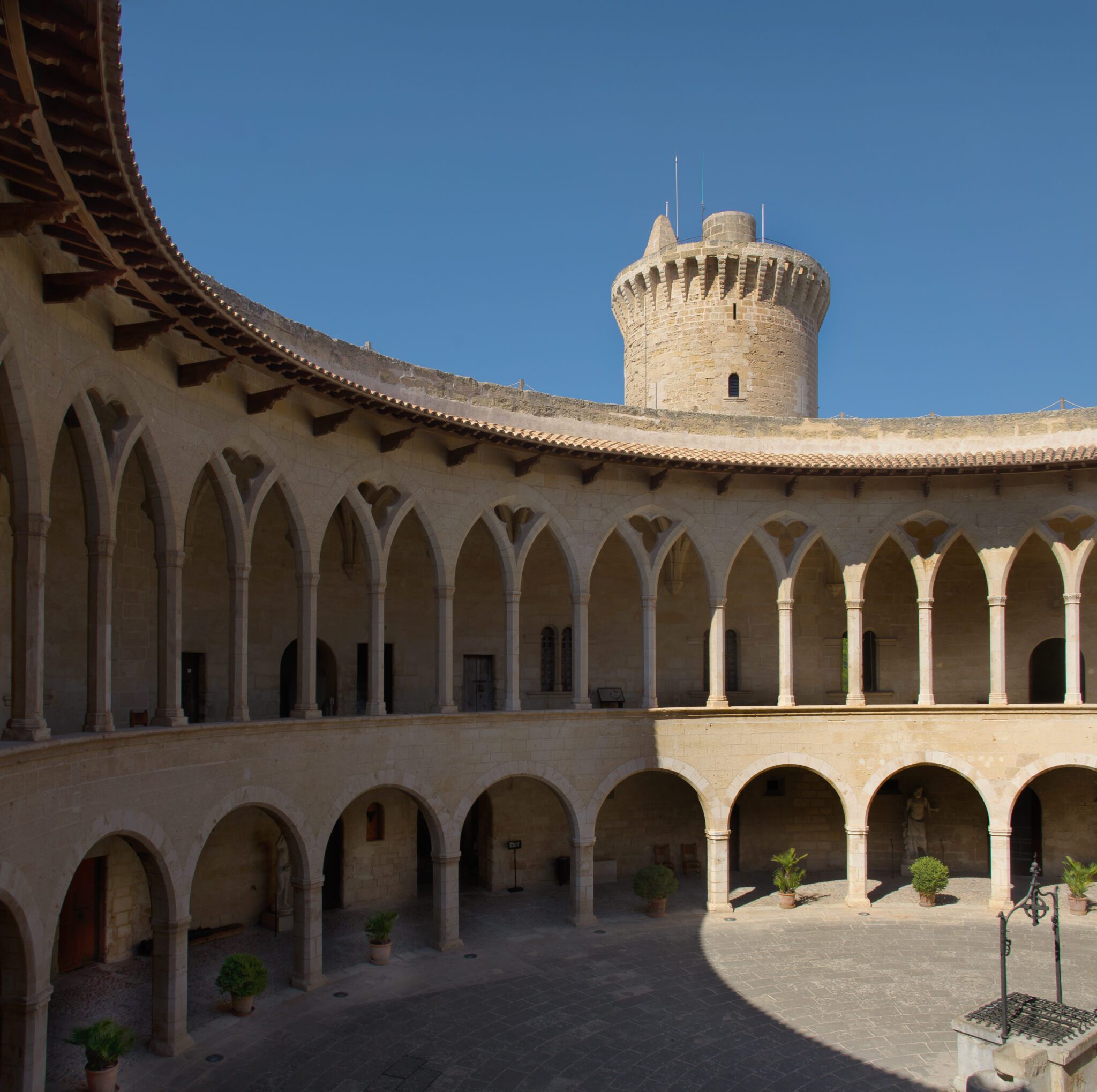 Surrounded by fragrant pine woods, the castle is unique in design and is Spain’s only round castle. Now a renowned Palma landmark located at the top of the hill Puig de Sa Mesquida, the former grand fortress and Catalan Gothic masterpiece attracts visitors by the hundreds who come to admire the architecture, the views and visit the interesting ground-floor museum.

King Jaume II gave the order for Bellver Castle to be built back in 1300 and the job was given to Pere Salva, the architect who designed the Almudaina Palace (The Royal Palace). 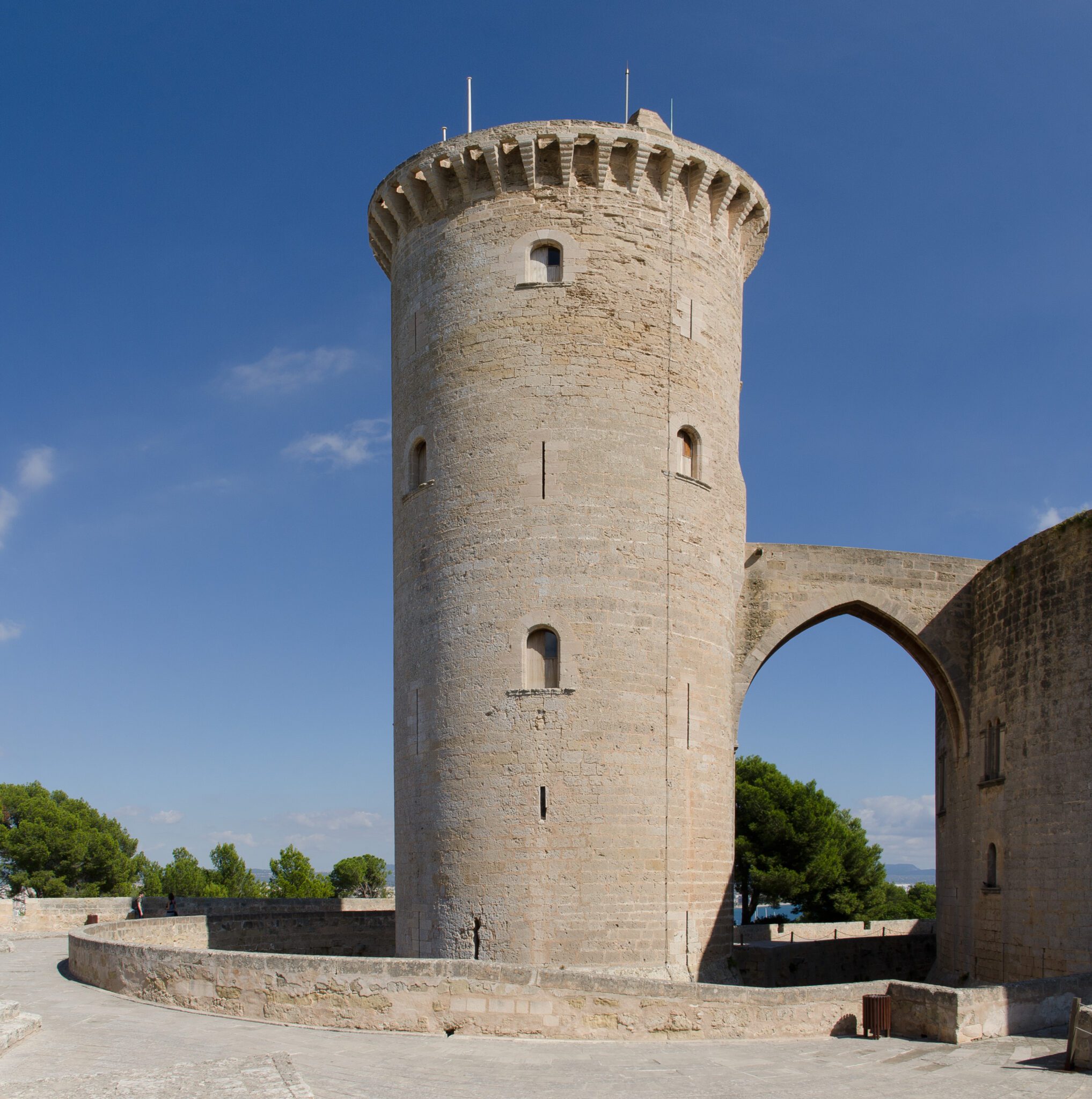 Bellver has three large towers surrounding a two-level central courtyard and a moat. You’ll see a contrast of architectural design as you explore the castle ranging from Gothic arches to rib-vaulting to semi-circular arches. The best way to see these contrasts is to look down at the courtyard from the roof.

The castle was built to serve as a royal residence; however, with the exception of residencies by King Sanç and Joan I of Aragon, the building has spent more time as a prison than a home. Bellver Castle has hosted many prisoners over the years including King Jaume IV & King Jaume III’s widow and sons and has been used as a penal institution during both the Napoleonic and Spanish Civil wars and World War II. If you visit the roof of the castle, you can see prisoners’ graffiti, carved into the stonework.

On the ground floor is Palma’s museum of municipal history (Museu d’Història de la Ciutat) which follows the development of the city from the prehistoric Talayotic civilisation to the present day via its artefacts including pottery from Talaiotic, Roman, Arab and Spanish periods and classical statues from the Despuig Collection.

The central courtyard is the stage for a series of classical music concerts performed by the Balearic Symphony Orchestra each July. These open-air evening concerts are very popular.

The best way to get to Bellver Castle is via car, there is parking available, alternatively combine your visit with the Palma City Sightseeing open-top bus, which stops at the castle as part of its circuit. If you use public transport, then the closest you will get is Plaça de Gomila, from there it is a 15 minute, 1km walk up a steep hill.

On this Palma tour with a twist, you won’t be walking around the city. Instead, you’ll have the fun experience of driving a 100% electric car to the top spots and standout photo stops. You’ll get behind the wheel and follow your guide on a two-hour route that includes entry to the San Carlos Military History Museum, Bellver Castle and the Caves of Genova. – Book now

The Castle of Bellver Audio Tour: A History of Resistance

Visit one of the most unique architectural gems of Mallorca as never before. You will relive battles and understand the importance of the military features of Bellver Castle. When you get to the main tower, you will hear the horrific stories of those who were held in the “Olla” in the past as a form of torture. This unique audio experience will move you as you hear the sad stories of those who were imprisoned in Bellver, such as Alexander Jaume during the Franco regime. The tour ends with the story of Gaspar Jovellanos (who was responsible for inspiring the current Spanish Constitution) and the reasons why he was locked up in Bellver for years. – Book now